The anxious wait is over as the much publicized Lancelot Oduwa Imasuen’s movie; ‘ATM’ (Authentic Tentative Marriage) which has already been dubbed the most hilarious movie of 2016 finally hits the cinemas nationwide on Friday May 13, 2016. 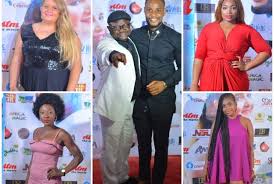 At the premiere on Friday May 6, 2016, foundation of Silverbird Galleria, Victoria Island, Lagos shook to its grounds as who is who in the Nigerian entertainment circle defied the Lagos traffic allegedly caused by the monthly RCCG Holy Ghost congress to grace the event.
As early as 5pm, movie enthusiasts had trooped out in their numbers for an event which started at 6:45pm. The open space of the galleria was jam-packed, a scene which held other customers of the galleria spell bound.

At the cinema hall, the space which could only accommodate about 200 seats had almost 500 viewers who were ready to withstand any hardship in their eagerness to watch the movie. Many stood for almost 2 hours when the additional movable chairs that were brought in have been exhausted, yet people kept trooping in to catch a glimpse of the movie.

Embassy of United Kingdom in Nigeria sent in more than five delegates to support their newly found star, Claire Edun, popularly known as Oyinbo Princess, who has British Broadcasting Corporation News (BBC) covering all her movement right from her arrival to the country on Thursday May 5, 2016.
Aside BBC, other big media houses such NTA, Channels, Silverbird TV, African Magic Jara, AMC, Vanguard, Galaxy Tv, SDK, Omonaijablog, Broadway and many others also pulled their weight behind the big budget movie.

The Fight Against Malaria - GSK Partners with LSMDA