Lagos-based lawyer, Olumide Babalola has dragged blogger, Linda Ikeji before the Lagos High Court for several reliefs bordering on unauthorized and offensive use of his picture. 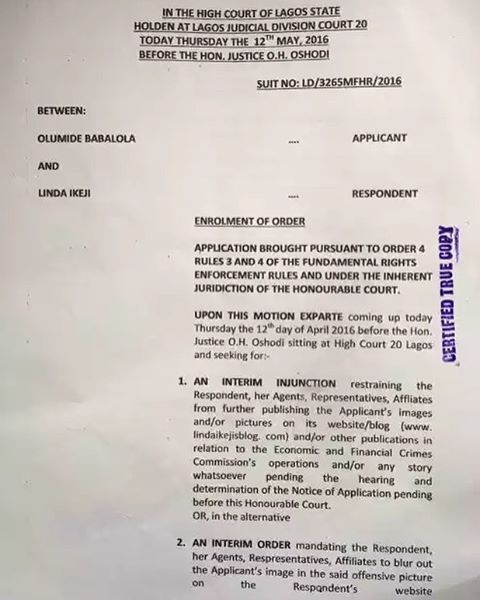 In Suit No. LD/3265MFHR/2016 before Hon. Justice O.H. Oshodi, the lawyer sued the blogger for damages in the sum of N50m for the unauthorized use of his picture on her blog for crime-related stories. He claims the use of his pictures for the crime stories has subjected him to mental and psychological torture in violation of his constitutional right to dignity of human person and freedom from degrading treatment.

Meanwhile, Justice O.H. Oshodi has granted an injunction restraining Linda from further use of the lawyer’s picture pending the hearing, otherwise she would be committed to prison for contempt of court.

It is said that Olumide Babalola had earlier written to Linda to desist from further publication but she refused to acquiesce to his request.

Hearing has been set for September 2016.

Linda Ifeoma Ikeji, born on the 19th of September, 1980, is a Nigerian blogger, writer, entrepreneur and former model. She is best known for her blog. She is the highest paid blogger in Nigeria.

Give Yourself A Natural Face-Lift With These Quick Tips