TV host, lifestyle writer, and ex-wife to Nigerian artiste 9ice, Toni Payne has lashed out at celebrity blogger, Linda Ikeji, describing her as a hypocrite. 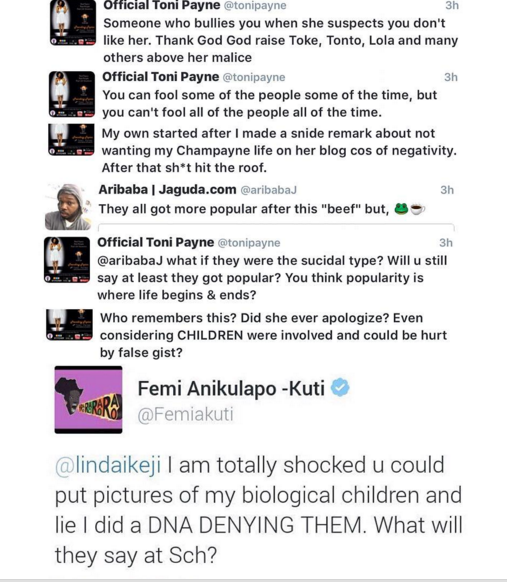 Popular blogger, Linda Ikeji who has been on a feud with popular entertainer Wizkid, recently published a write-up on why she reported Wizkid to the police. Sequel to this write-up she published, fans have reacted in several ways and aired their views as regards the clash between the two.

Toni Payne took to her Twitter page to share her thoughts about the Linda Ikeji and Wizkid clash, and also the involvement of the Lagos State Commissioner of Police into the matter.

In a series of tweets, Toni Payne attacked the blogger for pretending to hide under the gender equality and Women Rights’ card in the Wizkid feud when she has actually used her blog to bully several Nigerian female entertainers that she had issues with.

The popular blogger had pulled the gender card, saying Wizkid needed to be dealt with for promoting violence against women. Toni Payne accused the popular blogger of hypocrisy, saying she was more detrimental via her actions to the cause of women than Wizkid is accused of.

Toni listed celebrity/celebrity wives like Lola Omotayo, Toke Makinwa, Tonto Dikeh, the late Goldie, and even herself, who Linda Ikeji has attacked in the past with her blog.

Toni Payne also Tweeted about how Linda put up a false story about the legendary son of Fela Kuti, Femi Kuti, and the many lies she reported about his private life.

Toni said while she would not condone the words Wizkid used against Linda, she thinks the blogger got her match in the singer.

“I don’t condone violence and Wiz shouldn’t have said those words out of anger but she isn’t innocent in this either”, Toni said.

“When she said ‘let me leave you before i finish your career’, those were VERY conscious words based on EXPERIENCE! She feels she has that power.”