Comedian Bovi revealed via IG that his colleague Basketmouth was robbed this morning in his home in Lekki phase 1, between the hours of 2am and 4am. Basketmouth and his family were held at gun point while the robbery lasted but thankfully nobody was hurt. Bovi has now shared a video via snapchat in which Basketmouth can be seen having drinks with his friends, celebrating being alive.. 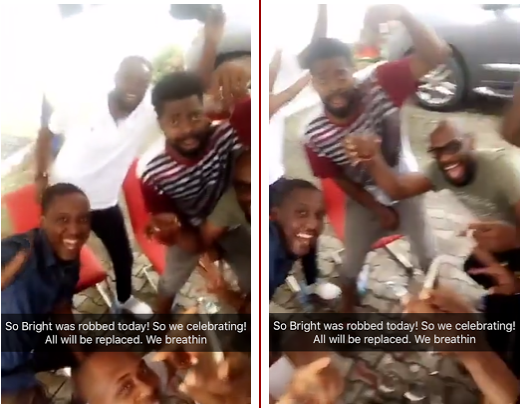 Bright Okpocha (born 14 September 1978 in Lagos), better known by his stage name Basketmouth, is a Nigerian comedian and actor. He has organized popular stand-up comedy concerts like Basketmouth Uncensored across the globe.

Basketmouth hosted a comedy challenge on Instagram, called the #TwoThingsChallenge which sparked an uproar from fans, after a young fan posted a video of him saying obscene things relating to sex, with a child in close view in the video.

Bright completed his primary and secondary school education in Apapa (Lagos, Nigeria) and then moved on to pursue a degree at the University of Benin where he studied sociology and anthropology with his brother Godwin.

Basket mouth was born in Lagos but hails from Abia State, Nigeria. He completed his primary and secondary school in Apapa, Lagos and moved on to the University of Benin, Edo State to study for a degree in Sociology and Anthropology. He discovered his skill in drumming in 1991 followed by taking up rapping in 1994. He then formed a group called “Da Psychophats” which had 7 members and they started going for shows and rapping in 1995, however they broke up before releasing any material. He went on to form another rap group known as “Da Oddz” with his brother Godwin and Muyiwa Osunrobi: they performed a couple of shows but didn’t break through as their brand of rap was not accepted in Nigeria

Acquire A Diploma in Web Development