Foremost digital television company, StarTimes hosts the first of its kind Chinese Cultural Festival in Abuja, tagged the 2016 Beijing TV Dramas and Movies Broadcasting Season exhibition.Historically China has maintained a deep and friendly relationship with African countries, and the cultural exchange is a sole means supporting the communication between the two sides. 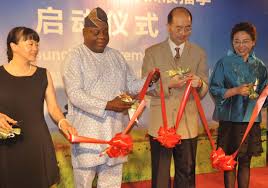 According to the Global Vice President of StarTimes, Ms. Guo Ziqi, ‘Nigeria is home to the largest subscribers of StarTimes and I believe that this cooperation will further promote the friendship between Nigeria and China. This event will screen 5 mega  hot series and 5 star studded big budget movies such as Chasing After The Love, Woman From The Family of Swordsman, Mazu, Go Away Mr. Tumour, Finding Mr. Right, Beijing Love Story, Back In Time, etc on StarTimes’ platform.Beijing leads China in producing TV dramas and movies. It now has more than 3,400 institutions specializing in Movie and TV production and operation, producing over 3,000 TV episodes and nearly 300 movies per year.’

The Beijing Municipal Bureau of Press, Publication, Radio, Film and Television holds the much anticipated Beijing TV Dramas and Movies Broadcasting Season in Nigeria, Rwanda and Tanzania this September initially for 3 months and lasting till September 2017 to further promote and consolidate inter cultural relations and promotion particularly on movies and drama series.

‘Historically China has maintained a deep and friendly relationship with African countries and the cultural exchange is a sole means supporting the communication between the two sides; noting that the launch of the Beijing TV Dramas & Movies Broadcasting Season in African countries aims to bring more Chinese stories into Africa and promote the cooperation in film and TV industry between the two sides.’

‘After two years of development, Beijing TV Dramas and Movies Broadcasting Season  has become an endearing and enduring brand in Africa, which helped popularize Chinese culture while facilitating friendly exchanges between China and Africa.Hit Chinese TV drama series and movies dubbed into English, French and five African languages by StarTimes, were aired over last two years. TV dramas like Let’s Get Married, Beijing Youth, The Heart without Thieves, Battle to Save Marriage, The Young Doctor, The Sweet Burden, Mi Family’s Marriage, Ordinary World and movies such as Love Is Not Blind, 20 Once Again, The Left Ear, A Wedding Invitation have been well-received by our African audience.’StarTimes Nigeria is happy to launch the 2016 Beijing Dramas & Movies Broadcasting Season here in Nigeria which will be graced by Beijing Municipal authorities, Bolaji concluded.

"If Not for Buhari, Nigeria Would Have Packed Up", Says Ex-Governor Segun Oni